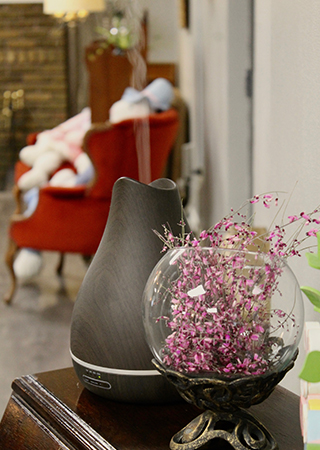 The Wales Home has several diffusers throughout the building, including in its Wellness Room and Main Living Room. These diffusers release vapor and essential oils into the air to provide clean and comforting aromas in public spaces.

Aromatherapy is known to improve sleep quality and reduce stress and anxiety. Another way in which the Wales Home implements this Best Practice is through baking activities; the Activity Department has a mobile oven that they take from unit to unit to bake everything from cookies to bread. Not only does this activity allow residents to engage in the act of cooking and baking, something that many no longer do, but the smells of freshly baked pastries permeate the entire unit and bring back memories of comfort and home. 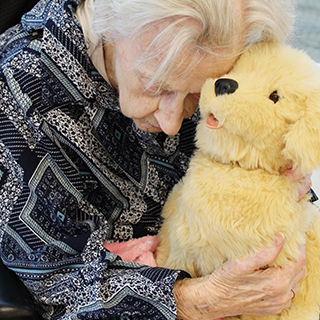 These companion pets bring people together and encourage meaningful connections between residents, family members, and employees. They promote social interactions and have proven to calm anxious residents. Residents have named these pets and treat them like members of the Wales family. 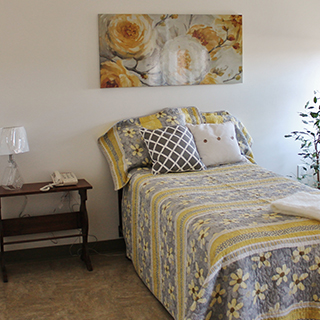 The CHSLD Wales Inc. has clovers on the inside of each resident’s bedroom door that indicates their risk level for events, such as falls, choking, and bed sores. 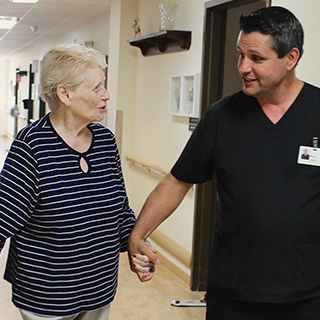 The Guardian Angel Program was implemented many years ago to help ease the transition of moving to a nursing home.

An employee or volunteer is assigned to every new admission to offer them a comprehensive tour of the facility and respond to any questions they or their family members may have. They provide the new resident with all documentation they may need and introduce them to other residents and employees in the facility. This Program demonstrates consistent results for the Wales; residents feel grateful and comforted by this initial contact and integrate into the Wales community more confidently. 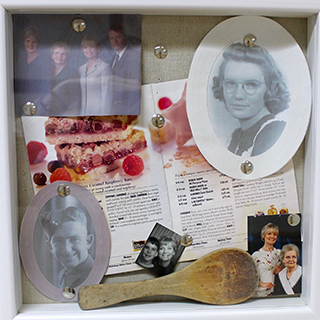 Each CHSLD resident has a Memory Box outside of their room, beside their door.

These boxes can be filled with anything that brings the resident joy in their life, including photographs, newspaper clippings, mementos from home, souvenirs from trips, and items from past hobbies or professions (e.g., cooking utensils, ballpoint pen, stethoscope, etc.). Family members can also bring items to fill the box. The boxes have a glass side, so the items are displayed for anyone who walks by. These boxes encourage residents to be creative in describing themselves using objects, but they can also be used to help calm residents with dementia. The implementation of these boxes has also proven to spark conversation between residents, as they find connection through common experiences. 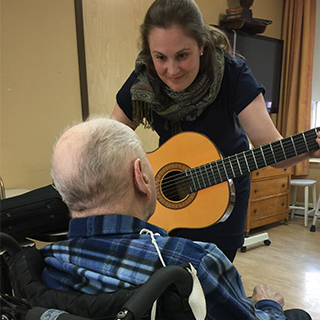 Trish sings and plays guitar in one-on-one musical interactions with residents. She chooses songs that trigger memories with residents, so that residents will sing along with her. Music Therapy acts as a cognitive trigger that can prompt residents with dementia, who have lost the ability to speak, to sing. Trish’s mix of gentle melodies and lively, upbeat songs are a welcome sound for everyone’s ears. 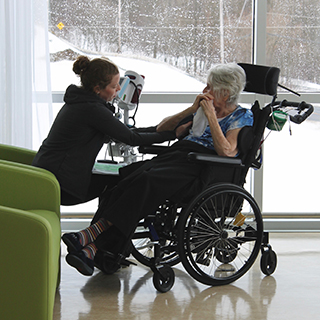 The NOLIDA program is designed to fight social isolation and make residents feel loved and valued.

Certain residents have a small or non-existent social network outside of the Wales Home, and thus need some quality one-on-one attention from someone inside the facility. The NOLIDA program ensures that residents’ social needs are met. Management take residents outside or for walks inside the building, and activities are performed daily. If a resident does not wish to attend structured activities in common areas, caregivers on the unit will conduct activities with them in the comfort of their own room or unit. 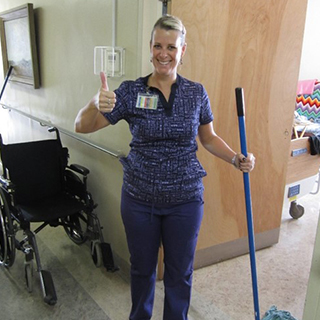 From time to time, Wales Home Management spends an entire day on the units, doing such jobs as Housekeeping and Maintenance.

Not-so-Undercover Boss days allow Management to get a clearer picture of the realities of front-line employees and allow them to make the necessary changes to improve working conditions for the employees. The days are also a lot of fun! 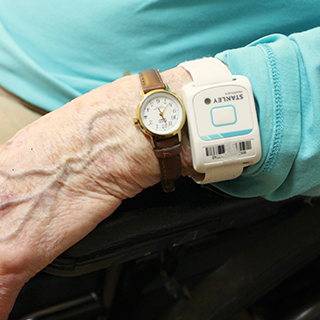 The Wales Home was the first healthcare facility in Canada to employ AeroScout’s state-of-the-art Real-Time Location System (RTLS), both inside the building and throughout the grounds.

The RTLS is designed to keep residents autonomous as long as possible, while simultaneously ensuring safety and peace of mind. This system does so through tags, which residents wear in the form of bracelets or necklaces, on which there is a button. When a resident needs assistance, they need only press the button, and a duress alert is sent directly to employees’ iPods. Employees receive alerts through the Mobile View application, which tells them which resident needs assistance and provides them with a map of the building, pinpointing the resident’s exact location. The employee can thus proceed to the resident immediately; once the resident has been helped, the employee cancels the alert, signalling to other employees that the resident no longer needs assistance. As this system works inside and outside the building, residents with mobility issues can confidently venture outside, independently or with assistance, and ring if they need help getting back indoors. This system simultaneously helps the Wales Home keep its residents independent and ensures security and safety. 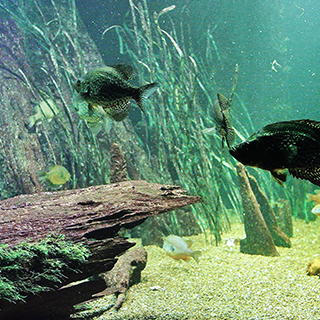 The Wales Home has a beautiful Sky Factory virtual ceiling in Norton 2’s living room. Norton 2 is one of the CHSLD Wales’s two micro-milieus for residents with dementia.

The virtual ceiling resembles a skylight and depicts a pristine blue sky with overhanging branches full of spring blossoms. The image is extremely life-like and brings the outdoors indoors for residents on the unit, many of whom are confined to wheelchairs, and thus do not have the ability to go outside independently. While caregivers and volunteers do bring residents outside as much as possible and as weather permits, these residents often do not get outside as often as they may wish, and they may not be capable of expressing when they do want to go outside. Thus, these residents benefit greatly from a virtual depiction of nature in a common space like the living room, where they spend a lot of time. Research indicates that such images produce physiological relaxation responses that help reduce stress and anxiety. The Wales Home thus decided to install a second Sky Factory image in the Wellness Room on the Mitchell Wing, an “E-Sea.” This virtual aquarium displays three different underwater environments that move and interact exactly as a real aquarium does. Such virtual aquariums promote calm and relaxation, which are the room’s main goals for residents, employees, volunteers, and family members alike. 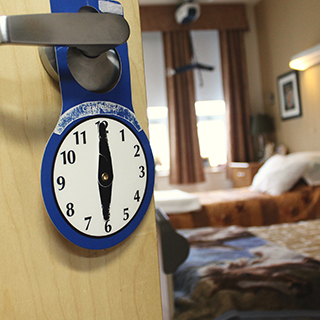 The Sleep/Wake Awareness Project is designed to optimize sleeping and waking hours to ensure residents get the most out of both.

Most seniors’ residences and CHSLDs have strict mealtimes and routines, requiring residents to get up in the morning and go to bed at night at specific, predetermined times. While efficient, these types of cycles are not realistic, as everyone has different sleeping preferences. Certain people are “night owls,” and like to stay up late, while others are “early birds,” who prefer rising with the sun, and others still are a variation of the two. The Wales Home thus sought to customize the sleep experience to each individual resident’s needs; now, residents go to sleep when they want, and wake up when they want, so long as they are getting a healthy amount of sleep. This new Sleep Program produced a marked improvement in waking hours as well, as residents are more alert during the day and more content with their sleep schedule and can thus devote more energy to waking hours. Caregivers and Activity Coordinators work to ensure ample activities are available during waking hours, so that residents can keep their minds and bodies occupied and satisfied to the fullest while awake. 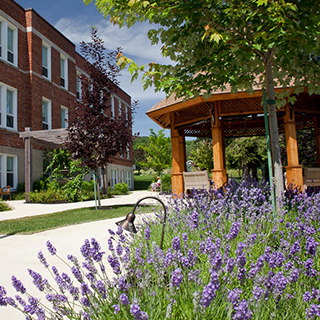 The Wales Home’s Therapeutic Garden is designed specifically for residents suffering from Alzheimer’s and related dementias.

The Wales Home wished to create a secure and serene space to help residents and family members cope with the disease and enjoy the outdoors. The Therapeutic Garden contains four distinct areas. The first area is a small vegetable garden, with berries and apple trees, where residents can maintain and harvest their own crops. The second area is designed for aromatherapy and contains flowers and plants that attract birds and butterflies. There is additionally a third area designed specifically for birds, with a fountain, bird baths, and feeders. Finally, the fourth area is completely shaded by trees and is meant to be a calm, private retreat for residents and family members. 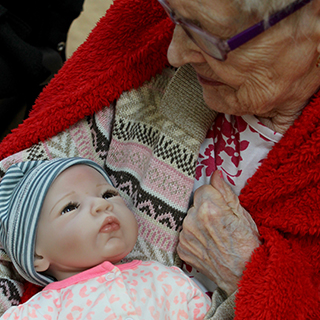 The Wales Home dementia units have two incredibly lifelike baby dolls for residents to care for.

These dolls were donated by family member Cathy Watson, who named the babies after her parents, Alison and Grant, both of whom passed away at the Wales Home and CHSLD Wales. Like the battery-operated pets, these dolls invoke calm and serenity. Residents feel useful and important when caring for the doll and, for many, the dolls bring back fond memories of when their own children and grandchildren were small. These dolls provide a safe and effective means of keeping these residents occupied and content. During the CHSLD expansion and renovation, a nursery was created for the dolls on Norton 1. 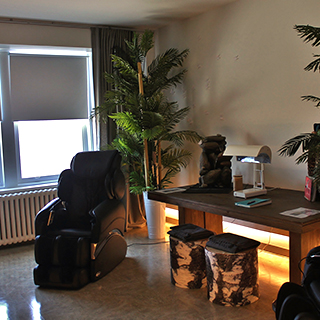 The Mitchell Wing houses a Wellness Room, which is an area designed to help reduce stress and improve resident, employee, volunteer, and family members’ wellness.

This best practice gathers several elements conducive to a peaceful regenerating retreat all in one room, including a virtual aquarium (E-Sea/Sky Factory), massage chairs, aroma and light therapy, yoga mats, and a Zen mural. This room is used daily and offers a space to unwind before returning to one’s hectic, everyday life. This room provides an ideal space for self-care acts, like meditation and yoga, which are becoming increasingly popular as means to alleviate stress and improve mental health. 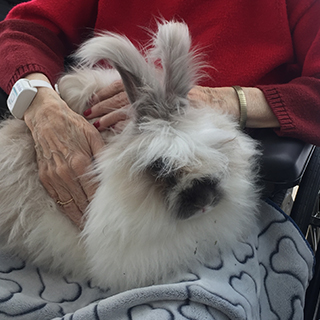 Once per month, Ann Caroline Coutu’s Toutous Poilus visit the CHSLD Wales. Ann Caroline has a pack of adorable animals, including rabbits, chickens, dogs, cats, guinea pigs, and even a miniature horse.

These animals brighten the residents’ days and remind them of a time when they too had pets or farm animals. Ann Caroline’s animals provide endless cuddles and leave residents smiling for the rest of the day! Ferme Frosttie Farm also brings some of their animals to the Wales Home every summer, so the Wales has its very own petting zoo! Residents can take care of the animals themselves, or just observe them when sitting by the pond.